I am still coming to terms with the fact that I travelled halfway around the world to share my social media journey and experiences with The Global Classroom Project at #iEARN13.

Qatar was the venue for my first (three!) international presentations, including my first Global Classroom Workshop, and the launch of my first iEARN project.

Here they are, with links to explore further if you wish.

Connecting Globally via Twitter and the #globalclassroom Chats (Workshop)

I still can’t believe that nearly 50 people attended this workshop, which was live translated from English into Arabic. It seemed to make quite an impact, judging by the frequent informal sessions I held with new iEARN twitter teachers over the days which followed!

It was a pleasure to present in front of the @iEARNAustralia management team, who now have a much better understanding of what I’ve been trying to do with our organisation’s Twitter account.

This workshop was also the first time I experimented with a bilingual “Find Someone Who” activity as a brief 5 minute introduction to the ‘essence’ of Twitter – short, rapid fire conversations with global partners around a range of issues.

A huge thank you goes to @rawyashatila in Lebanon, who generously translated the document into Arabic! 🙂 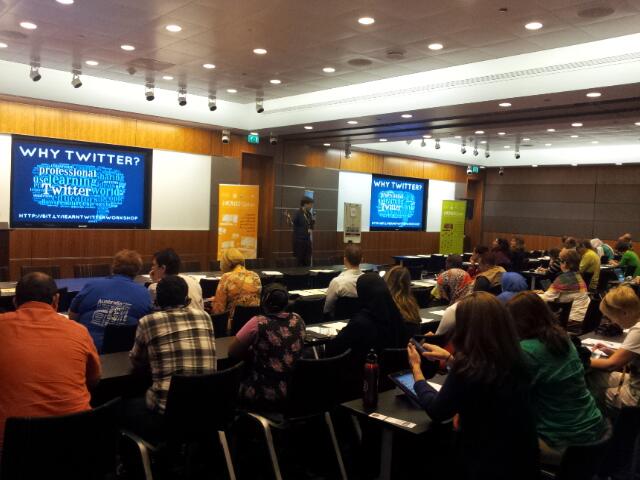 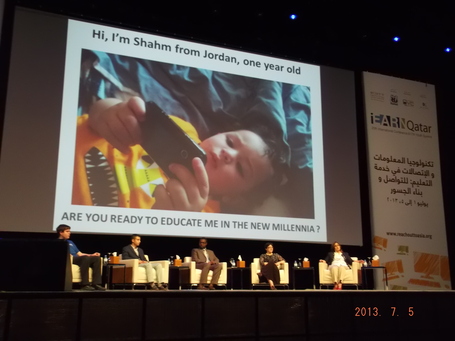 One of the unexpected surprises of the iEARN Conference was the invitation to contribute to the Social Media Panel Keynote, created by Khitham Al-Utaibi (@khitamah) and Rebecca Hodges (@ProfHodges).

Presenting alongside 3 academics, and one of the most globally aware high school students I’ve ever met (@AndrewNasser), was quite an experience. We had around 450 people in the audience, and I received some very positive feedback on my contribution. I suspect I went over my time allocation slightly, but I think this tweet sums it up nicely:

Well done @mgraffin A short, sharp presentation on the relevance of social media that resonated with many.

This turned out to be one of the more productive sessions of the conference, where I took the opportunity to share the story of the #globalclassroom travelling scrapbook project, and discuss plans for an iEARN version.

I took away some hastily scribbled notes / suggestions, and a list of potential partners. I’m hoping to get this project running by September 2013, and will have to try and sort out the planning / organisation approach over the next week or so.